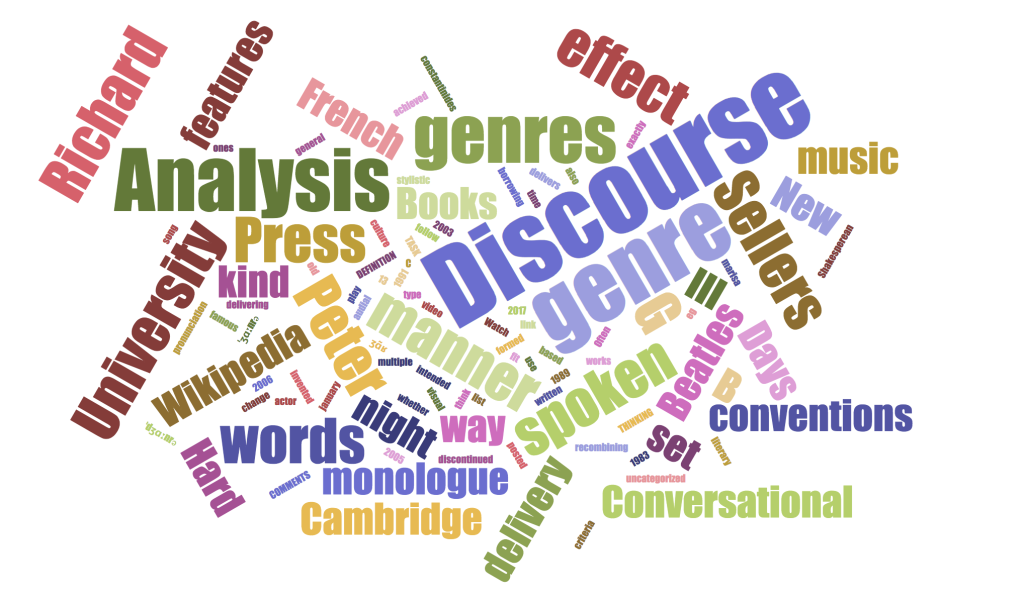 /ˈʒɑːnrə/ or /ˈdʒɑːnrə/; from French, genre French pronunciation: [ʒɑ̃ʁ], “kind” or “sort”, from Latin: genus (stem gener-), Greek: genos, γένος) is the term for any category of literature or other forms of art or culture, e.g. music, and in general, any type of discourse, whether written or spoken, audial or visual, based on some set of stylistic criteria. Genres are formed by conventions that change over time as new genres are invented and the use of old ones are discontinued. Often, works fit into multiple genres by way of borrowing and recombining these conventions.

Watch this video of Peter Sellers and think about the features of the genre he is delivering.

How exactly has he achieved his intended effect?

Peter Sellers delivers the words of the famous Beatles song “A Hard Day’s Night” in the same manner that a Shakesperean actor would deliver the monologue from Richard III – he is not only dressed and surrounded by the props which we associate with William Shakespeare’s Richard III but his spoken style of delivery imitates the spoken features of this particular theatrical genre.

The effect is hilarious.

Is he insinuating that the manner of delivery may sometimes assign some kind of aura to the words that they might otherwise not have?

I don’t know. But what he (or his director) has created is a wonderful starter for discussions on the notion of genre.

Peter Sellers is flouting Grice’s conversational maxim of manner in the deliberate way that artists do in order to generate thought or to create a comical effect.

Imagine if the Beatles set Richard II’s monologue into music similar to a Hard Day’s night. Would we take the words as seriously then, I wonder.

Some Books on Discourse Analysis

I train TEFL teachers at CELT in Athens Greece and online - our main courses are Cambridge CELTA and Delta. I interact with educators from all over the world through social networking sites such as Facebook, Twitter, and through blogging View all posts by Marisa Constantinides

Daniella on following the intensive course in Athens

Liam on his ELT Management course in a Moodle platform