Watch this much discussed video of a young beauty pageant contestant answering a question posed by the judges.

1. Is Miss South Carolina coherent or not?

2. Read this text and say if it is coherent. Try to answer the following questions:

These children can be said to have two three or more mother tongues neither language is foreign to that child even if one language is a foreign language for the vast majority of people in the childs birth country. On average in Europe at the start of foreign language teaching learners have lessons for three to four hours a week. The Welsh language is also compulsory up to the age of 16 although a formal qualification is optional..In some countries learners have lessons taken entirely in a foreign language for example more than half of European countries with a minority regional language community use partial immersion to teach both the minority and the state language..In 1995 the s White Paper on Education and Training emphasized the importance of schoolchildren learning at least two foreign languages before upper secondary education.

Scroll down to the end of the post view the answer.

Review the following definitions and choose the best one (or the one you understand best):

Coherence in linguistics is what makes a text semantically meaningful.It is especially dealt with in text linguistics. Coherence is achieved through syntactical features such as the use of deictic, anaphoric and cataphoric elements or a logical tense structure, as well as presuppositions and implications connected to general world knowledge. The purely linguistic elements that make a text coherent are subsumed under the term cohesion.

Robert De Beaugrande and Wolfgang U. Dressler define coherence as a “continuity of senses” and “the mutual access and relevance within a configuration of concepts and relations” . Thereby a textual world is created that does not have to comply to the real world. But within this textual world the arguments also have to be connected logically so that the reader/hearer can produce coherence.

Coherence is the quality of meaning unity and purpose perceived in discourse. It is not a property of the linguistic forms in the text and their denotations (though these will contribute to it), but of these cover forms and meanings interpreted by a receiver through knowledge and reasoning. As such, coherence is not an absolute quality of a text, but always relative to a particular receiver and context. A description of coherence is usually concerned with the links inferred between sentences or

utterances. It is often contrasted with COHESION, which is the linguistic realization of such links (Halliday and Hasan, 1976).

the relationships which link the meanings of UTTERANCES in a DISCOURSE or of the sentences in a text. These links may be based on the speakers’ shared knowledge. For example:

A:Could you give me a lift home?

B: Sorry, I’m visiting my sister.

There is no grammatical or lexical link between A’s question and B’s reply (see COHESION) but the exchange has coherence because both A and B know that B’s sister lives in the opposite direction to A’s home. In written texts coherence refers to the way a text makes sense to the readers through the organization of its content, and the relevance and clarity of its concepts and ideas. Generally a PARAGRAPH has coherence if it is a series of sentences that develop a main idea (i.e. with a TOPIC SENTENCE and supporting sentences which relate to it).

Cohesion is generally easier to teach as it involves lexical and grammatical links but coherence tends to be more difficult and it would probably involve quite a lot of recognition and analysis work on the information structuring of the genre you are training your learners to produce.

Activities which might encourage recognition and awareness raising – a few ideas:

Here is a good post from OnestopEnglish on just this topic with a great paragraph at the end by Scott Thornbury.

Find a great collection of lesson plans here on a variety of aspects of coherent transitions in writing; although intended for K-12 students, ELT teachers can find a great number of ideas which can be easily adapted to the ELT classroom.

Please share your own ideas or links in a comment; if you have written a relevant blog post or found a great link, I hope you will! 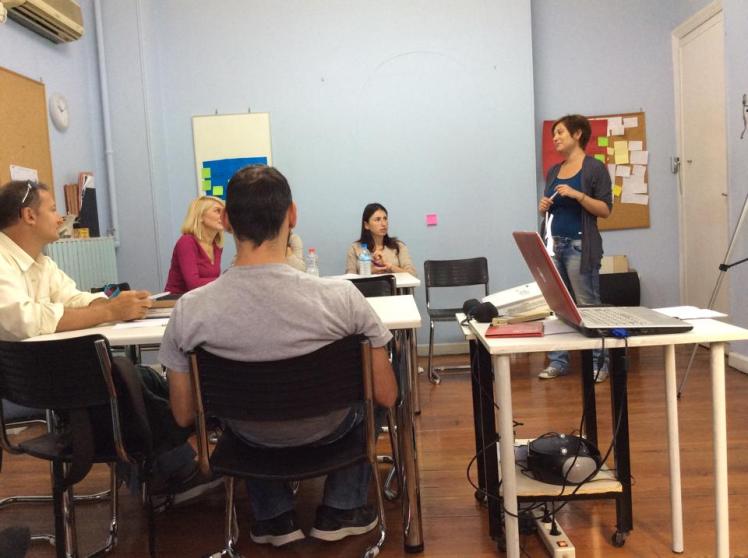 1. Not! (with all sympathy for this young contestant  who blanked out in front of the cameras..There are follow-up videos where she explains all,  in case you might want to use this in a lesson)

2. The text above was taken from a spam message on my blog – in response to a post about large school chains – franchises in Greece and elsewhere. It is not coherent because:

Interestingly, the mind of the reader who reads this text, attempts to find/discover some coherence in this text, simply because it has the shape and layout of a paragraph; hence we expect it to be coherent.

Days till our next Delta Course

Daniella on following the intensive course in Athens

Liam on his ELT Management course in a Moodle platform